Be on the look out

Over the weekend I was coming back from the doggy park - stopped at a stop sign - and was crashed into by a hit and run driver! I ache, dog is a bit traumatized and car is not looking too good. 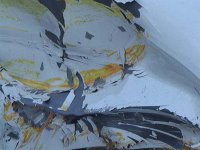 The car that hit me had to have sustained damage too and I am hoping that someone will see it and call the police. It had a lot of yellow [see photo] on what I recall was a two toned car and the damage was to that car's driver side as they hit me driver side to driver side.

After all my city living and decades of driving - this was a first.

The driver scares me - they had no idea if I was hurt or killed - they were more intrested in speeding away. No conscience - no morality - and no concern for anyone or anything.
Posted by Lynn Dorman, Ph.D. at 10:11 AM No comments:

We met Mike Leonard, our new police officer. Officer Bob is being deployed with his Guard Unit. At the April meeting all current Board members are up for re-election and write ins are also welcome. Mike Gibson was appointed to fill the slot of Vice Chair- thank you Mike.

Neighborhood watches were again discussed and this time more neighbors expressed interest. Spring clean up date is April 22, and a neighborhood bike ride will take place on April 29 or 30. Stay tuned : )

There is a Board meeting on March 15th at Channel's Edge.
Posted by Lynn Dorman, Ph.D. at 1:40 PM No comments:

Welcome to the new site. You can read or post as on the old one...just no pre set categories.
Posted by Lynn Dorman, Ph.D. at 8:12 AM No comments: